We may fail at football and often disappoint at cricket, but one thing that the UK proves adept in is the world of poker. We boast 29 World Series of Poker bracelets, second only to Canada and of course the host, the USA - considering that American players make up the vast majority of entrants year after year, that's not too shabby. And their stories and achievements will fascinate you:

So who's the cream of the crop - the Bobby Charltons and Johnny Wilkinsons of the felt? Let's find out.

Grundy is the player on this list that you're least likely to recognise if you run across him in a card room - though, as his online moniker suggests, he resembles the Milkybar Kid of classic TV adverts.

Milkybars certainly are on him though - he can afford to buy a ton of them. Grundy boasts one of the most impressive cash game graphs of any cash game player we've ever seen - all the more impressive because of the seemingly variance-free rise of his profits (and he plays Omaha almost exclusively). 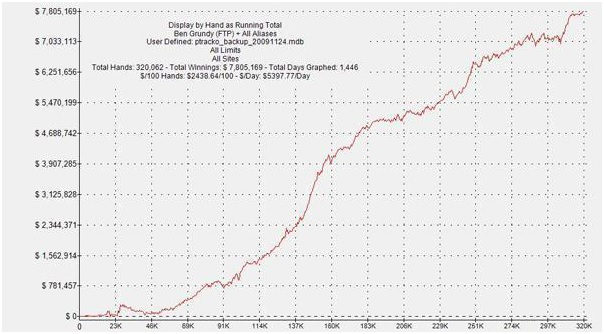 When you post a graph and people immediately question its authenticity, you know you're doing alright. Over just 320,000 hands Grundy has amassed almost $8 million dollars in winnings and continues to crush the games to this day. Check out his Twitter feed for updates here .

Ashton is the least-accomplished player on this list in terms of his total tournament cashes or poker presence, but is by far the fastest-rising star.

A virtual unknown in 2012, over the past two years he has netted more than $4.5 million in tournament cashes with consistent results and consecutive $2 million years. The most impressive thing is that, unlike many other young pros, he competes with seasoned veterans in the mixed game events - and crushes.

He began 2013 with a final table in the $5,000 8-game event at the Aussie Millions before taking down the €5,300 8-game at the EPT Grand Final. Then he went to the WSOP and was a serious contender for player of the year - he made final tables in the $2,500 Omaha/Stud Hi/Lo event, the $5,000 Stud Hi/Lo event, the $2,500 Stud event, and capped it all off with a win in the prestigious $50,000 Poker Players' Championship - arguably the most coveted bracelet outside the Main Event.

We're very excited to see what Ashton will accomplish in 2021 - watch this space. Keep up with Matthew's latest successes by following him on Twitter.

De Wolfe started his ascent to the top ranks of UK poker pros over a decade ago, after winning his first money prize in a poker festival which earned him a seat in the 2005 WSOP. His wins in WPT and EPT events in 2006 made the history books, being the first player to every accomplish such a feat. De Wolfe would later become the second person to complete the hat-trick of winning WSOP, EPT, and WPT titles in the same year.

His road to amassing a fortune of over $5 million begun long before we could legally enter a poker room or casino. The 12-year-old Roland would play cards on the school bus and make wagers with his friends. Although he was always fascinated by casinos and betting, it is in poker that he chose to perfect his skills and hone his aggressive style of playing. One could say that that gamble has paid off nicely indeed!

In recent years, De Wolfe hasn't been seen or heard much in the poker tournament circuit, having seemingly retired to a high-stakes life in London. You can find out what Roland DeWolfe has been up to lately by checking out his Twitter account.

Without doubt, Jake Cody is one of the hottest young players on the tournament circuit right now - the newly-signed PokerStars pro burst onto the scene in 2010 and has since made more than $3.6 million in live tournament cashes.

Most impressively, he became the youngest player to win poker's "Triple Crown" - an EPT, WPT, and WSOP title. He did this all in less than 18 months - beginning with an €857,000 EPT Deauville victory, taking down the inaugural WPT London seven months later, and then netting his WSOP in style with a $25,000 Heads-Up Championship win.

In additional to this he also boasts a ton of online accolades including a 2011 SCOOP High win for almost a quarter-million dollars. The latest updates from Jake can be seen on his Twitter feed.

Trickett is one of the only English pros who has built a sufficient bankroll to take his skills to the crazy-high-stakes games in Macau and is the highest-earning tournament player in UK history.

Even discounting his runner-up finish in the record-breaking Big One for One Drop (which gave him $10 million) he has made nearly eight figures - most of which came in his amazing 2011; this was the year in which the poker world remembered the name Sam Trickett.

He's still a man who loves the game at heart though, as evidenced by his recent win in a relatively tiny £250 Road to Old Trafford event that saw him meeting his football idols as well as taking down "only" £10,000. Sam's a big Twitter user, have a look what he's been up to here.